CHIMBOVISION as production partner of the SSL Goldcup in Grandson.

The CHIMBO team supported the SSL with offshore camera system, onboard cameras, drone operations and technical staff for the 3 Test Events with live-streaming on Lake Neuchatel in Switzerland.

More to come with the official start of the qualifying for the SSL GOLDCUP 2022!

SSL aims to promote inshore sailing’s stars with an ultimate level competition (the SSL Gold Cup) inspired by the Football World Cup and used as a showcase event to appeal to sailors, sports fans and the general public. If everything goes as planned, it is likely that the SSL Gold Cup will generate an unprecedented audience for inshore sailing, perhaps even higher than that of the America’s Cup or the Olympic sailing competition. However, an isolated media spike in June 2022 would not meet our goals, as the ultimate goal of SSL is to maintain an audience threshold throughout the season. 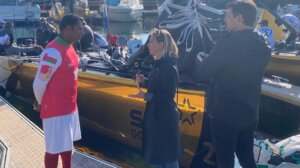